The moment that changed everything for Se’Nita 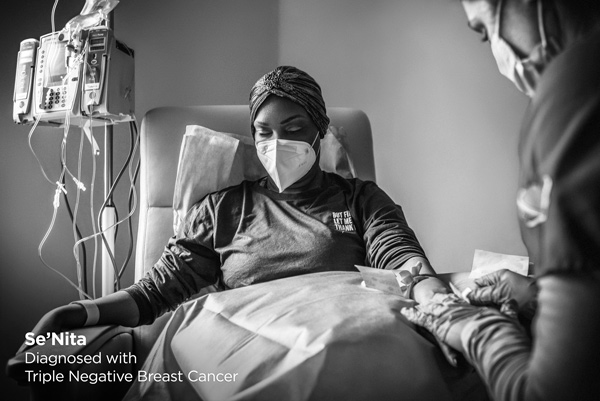 Throughout her experience with breast cancer, Se’Nita has learned the importance of advocating for herself. “You need to speak up when you have questions or concerns,” she said.

Se’Nita spent Thanksgiving 2020 alone in New York City, where she lives, far from her family in Chicago. She was supposed to fly home for the holiday, but the weeks leading up to Thanksgiving had been a rush of medical appointments.

She’d felt a lump and made an appointment with her doctor. “My doctor felt it and was like, well, you’re too young for breast cancer, but it might be a fibroadenoma, go ahead and get a mammogram.” At the mammogram appointment, Se’Nita also underwent an ultrasound. “I could tell they were looking at something,” Se’Nita recalled. “They wanted further testing, they wanted me to try to get in for a biopsy right away.”

Se’Nita cancelled her flight home and had the biopsy done the day before Thanksgiving. A week later, her phone rang while she was at the office. It’s a call she remembers vividly. “On the call, the words, they literally looked as if they were coming out of the phone,” Se’Nita said. “They said, we see some malignant cells.”

It was the moment that changed everything for Se’Nita. “There are so many emotions that come with the initial shock of such a lifechanging event,” she said.” But once you gather all your emotions and stand up from the blow that knocked you flat, you begin to deal with all these new things.”

Initially, Se’Nita was told she had metaplastic breast cancer. “They told me it was rare and aggressive,” she said. It was recommended she undergo a double mastectomy. The whole process was chaotic. “I was so confused about a lot of the stuff I was being told,” she said. “Everything was very scary. It was not a good experience, I felt like I was just a number. I realized I needed to advocate for myself.”

She decided to get a second opinion, a decision that proved fortunate. After reviewing Se’Nita’s slides and pathology, her new care team determined she had triple negative breast cancer, not metaplastic breast cancer.

The moment Se’Nita met with her new doctor, she felt a sense of peace. “She said we caught it early, you’re going to be fine,” she recalled. She no longer felt like a number. “When my doctor makes recommendations, she’ll say, ‘oh, if you were my sister, I’d recommend this or that.’ I feel cared for. I feel like I’m listened to.” Her treatment will include chemotherapy, a lumpectomy and radiation therapy.

During treatment, Se’Nita has used social media to not only share her story, but to give and receive support. To others on a breast cancer journey, she said, “It’s important to lean on other women who’ve

gone through this journey and to know that you’re not alone.”

Se’Nita hopes other breast cancer patients will use their voices, too, to ensure they get the care they need and deserve. “People need to not be afraid to advocate for themselves,” she said. “You are the most important thing in this situation. Nothing matters more than speaking up for yourself. Be informed about your diagnosis, get as much information as possible, lean on others who have gone through this journey. You are what matters most.”

If you have questions about breast health, breast cancer, local and national resources or need information about clinical trials., visit komen.org or contact the Komen Breast Care Helpline at 1-877 GO KOMEN (1-877-465-6636) or email helpline@komen.org.