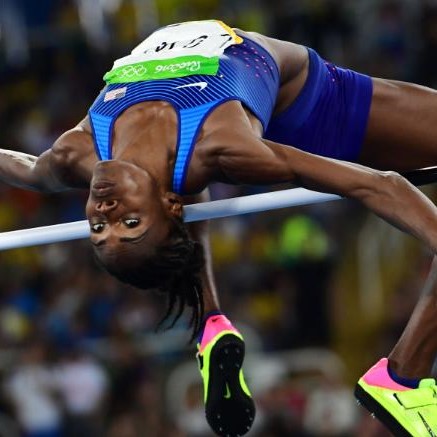 (CNN) Chaunté Lowe is accustomed to having her world turned upside down.

A four-time Olympic high jumper and the bronze medalist from the Games in Beijing 2008, she was diagnosed with breast cancer last year.

It was unexpected, to say the least.

“I did all this stuff right to not have to be here. It was a misconception that leads to a lot of misdiagnoses early on, especially in young women.”

An initial misdiagnosis made matters worse.

A small, rice-sized lump drove Lowe to visit the doctor when she was 34.

The doctor deemed it innocuous, according to Lowe, who says he told her “definitively, I don’t want to see you for six years” until she turned 40.

Thankfully, as an Olympic athlete she monitors her body “like a fine tuned machine.”

Lowe says she felt the lump growing every day, something she describes as “terrifying.”

After 11 months she sought a second opinion, and was immediately sent for a biopsy.

Lowe later found out she had triple negative breast cancer — a very aggressive, fast growing form of the cancer — something that affects women with West African ancestry at rates that are significantly higher than for other groups, according to the American Cancer Society.

Had the cancer been diagnosed correctly the first time, it is possible she would have needed only a lumpectomy with radiation, according to a spokesperson for the Susan G. Komen breast cancer organization.

Instead, Lowe underwent a double mastectomy and chemotherapy in 2019.

“He was definitely an easy target,” Lowe says of her first doctor. “But, I will say that the only thing that I probably wish he would have done different is not said, ‘definitively, there’s nothing wrong.”‘

She says her treatment has been successful though, and new doctors have found no further evidence of cancerous cells.

However, her body is still recovering from chemotherapy, which has weakened her immune system.

A second bar to jump

The outbreak of coronavirus complicates matters for Lowe.

Owing to her weakened immune system, she is now classed as a vulnerable person, something that Lowe indicates is uncomfortable but “eye-opening.”

Despite serious health concerns, Lowe had been determined to compete at Tokyo 2020.

“I would have been scared,” she says. “And I would have had a lot of different worries going into it that maybe some of the other athletes didn’t have.”

But with the Olympics now postponed to 2021, the high jumper is more determined than ever to make the squad.

In 2008, Lowe finished sixth in the Olympic high jump competition but was later upgraded to bronze when three athletes above her tested positive for banned substances.

Lowe wants to use the buildup and the event itself to raise awareness for breast cancer.

More than 42,000 women are expected to die from breast cancer in the US this year, according to the American Cancer Society.

In 2018, there were more than two million new breast cancer cases worldwide, according to World Cancer Research Fund International.

Researchers stress that early detection of breast cancer leads to the highest rates of survival. Lowe hopes that, by raising awareness, she can help others.

As for the Olympics, Lowe says the International Olympic Committee made the right call to postpone the event.

But she recognizes the impact and disruption the postponement could have on athletes.

“You put your life on hold for the Olympics,” she says. “Imagine if you’ve ever been on a tough diet, and you’re like, ‘OK, I could hold it for this long, but at this point in time, I’m going to break.’

“And now they’re telling you everything that you’ve done to put your life on hold, you have to do it a whole other year — it’s going to be very difficult.”

Lowe has spoken to fellow athletes who are unsure if they will be able to make it to Tokyo next year, adding that “mentally, it’s exhausting.”

She relates the impact Covid-19 has had on athletes everywhere to her experience of breast cancer.

“You’re at peak physical health,” she explains. “You have dreams of going to the Olympics, competing on the world stage, to represent your country, your family, your sport, and then all of a sudden, it’s ripped from you.”

The president of World Athletics, Sebastian Coe, says the postponement of the Games was necessary to safeguard the psychological well-being of athletes, many of whom he says were in “mental turmoil.”

Lowe agrees that athletes’ mental health has been, and will continue to be, affected by the postponement.

“Mentally, you’re going to have to focus on positive things and I definitely think there could be a mental health barrier,” she says.

“They’re going to have to look at athletes that have overcome obstacles and still get there and have their Olympic moments and achieve their goals.”

While training for the Olympics, Lowe has also been raising three children.

Now she’s a breast cancer survivor too, determined to support others and spread awareness about the illness.

And amid the impact of a global pandemic, she is also determined to look for positives.

“By us all being apart, it shows that we’re all coming together,” she says. “Everybody cares about the well-being of our world and the health of our world.

“Everyone had to take part in this process of making sure that our world is healthy.

“And so I think that it [the Tokyo Olympics] will be a time of peace, a time of celebration, and hopefully, a time to remember where we all had to come together as one world to save the world.”