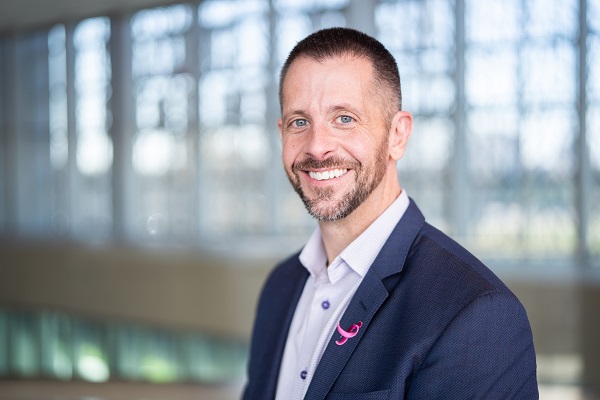 Schneider, a Komen Scholar, is the Director of the Indiana University Health Precision Genomics Program and Director of the triple negative breast cancer pillar for the Precision Health Initiative at the IU School of Medicine.

Komen: As a researcher, what is the importance of clinical trials?

Schneider: Clinical trials really set the stage for everything we do as physicians and oncologists. So, as we think about all the major breakthroughs that have happened over the years and all of those incremental, and sometimes large advances, that we’ve made, those have been a function of learning within the context of a clinical trial.

Komen: One of the other things we know about clinical trials, or at least one of the limitations is the lack of diversity in those trials – whether it be not enough younger women, not enough older women and enough people with brain metastasis, and the lack of racial and ethnic diversity. How have you gone about trying to ensure we have greater diversity in the clinical trial pool?

Schneider: This is an area I’m very passionate about, and it’s an area of frustration as we try to improve care for all patients. When we see a lot of the examples and a lot of the findings from clinical trials, they really are a function of what’s happening to only those who participate, which is often not inclusive enough of African Americans. So, we’re globally making decisions based on clinical trial results taken from a subset of patients of other races who we know have different outcomes. So, from my standpoint, it’s been important to understand why clinical trials overall do not include a diverse patient population? And, to do that we’ve tried to get out into the community. We have partnered with advocacy groups who are focused on minimizing disparities to really understand what hurdles are preventing diverse patient representation in trials so that we can overcome them in a way that inspires all patients to become part of clinical trials.

Komen: Have any of you engaged anything novel to try and overcome some of those cultural barriers?

Schneider: We’ve done a few things. No. 1 is trying to get into the community – conducting workshops and symposiums to really try to have a dialogue and improve understanding of underlying barriers. We’ve also tried to take advantage of social media. It’s been amazing to me how many people really do network by social media and how impactful and powerful it can be. Social media can be used to dispel very simple rumors or fallacies regarding clinical trials. And I think it has been an amazing step forward for us in improving participation in trials.

Komen: Have you seen some success in those efforts?

Schneider: We have seen success in one of our clinical trials that focused on patients with triple negative breast cancer, a subtype of breast cancer that affects African Americans more commonly. We were very happy that over a quarter of the patients recruited to that trial were African American. I think had we started this movement earlier in terms of trying to improve patient accrual and enrollment in this particular clinical trial, we would have done even better than that. And we certainly hope to continue these efforts for future trials.

Komen: Anything exciting on the horizon to recruit more diverse populations in clinical trials?

Schneider: We are incredibly excited. Just a couple of months ago, we had activation of a clinical trial called EAZ171 at multiple sites across the U.S. This clinical trial was founded based on a decade of work supported by Susan G. Komen. It is the first NCI-Cooperative Group trial to ever specifically focus accrual on African American women with breast cancer. Our goal is to recruit 240 patients getting chemotherapy in the curative setting. The end goal here is to understand which African American patients are at most risk for getting a severe form of toxicity known as peripheral neuropathy, which can occur when chemotherapy damages nerves in the hands and feet, affecting feeling and movement.

Komen: We want to make sure that a clinical trial pool is diverse, but why is it so important that we include African Americans in our research?

Schneider: In some of our earlier research, what we found is African Americans have worse breast cancer outcomes compared to white women in the U.S., specifically triple negative breast cancer. We also found African Americans globally have more side effects from chemotherapy. If you really want to understand breast cancer disparities, you have to focus your science and clinical questions around the population impacted by disparities. From my standpoint, if we want to make a dent in these toxicities and improve outcomes, we have to study the population that’s suffering.