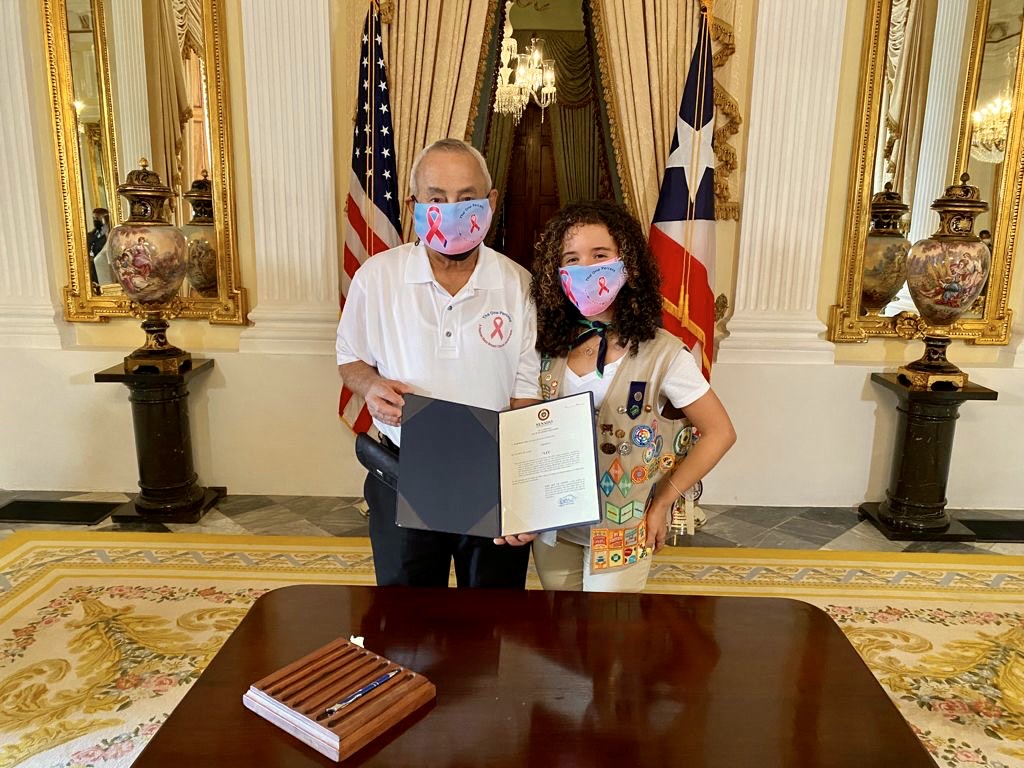 Sixteen-year-old Isabel has always been close to her grandfather, Leandro.

“He taught me to ride a bike and how to drive,” Isabel said. “We go to the beach together, we prepare meals, we spend a lot of time together.”

In September 2019, Leandro found a lump in his right breast. In early October, test results showed Leandro had breast cancer. “Our family was in shock,” Isabel said. “We didn’t have any history of breast cancer and we didn’t know then men could get it.”

In order to fully understand what Leandro’s diagnosis meant, Isabel began to research the disease. “I wanted to learn more about breast cancer and why it happens,” she said. “What treatments would my grandfather have, what side effects would there be.”

As Isabel learned more about breast cancer, she realized that, like her own family, many people thought of breast cancer as a disease that affects women only. A Girl Scout, Isabel turned her curiosity and what she learned into a Gold Award project, which is the highest achievement a Girl Scout can earn.

“I wanted to bring awareness to the fact that men can get breast cancer, too,” Isabel explained. As part of her project, she developed a webpage and shared what she learned on social media and created a ribbon that is 99 percent pink and one percent blue, to highlight men, too, get breast cancer.

“I want to keep spreading the message that men can get breast cancer, too,” Isabel said. “This started with my grandfather’s breast cancer diagnosis, but it’s turned into a life project for me and my family, to create awareness. It’s been a scary time, but we’ve learned to turn those feelings into courage and move forward.”

As part of her Gold Award project, Isabel also worked with the Puerto Rican government to have the second Friday of October declared as Male Breast Cancer Awareness Day. On October 8, 2021, Isabel, Leandro and their family were present as the governor of Puerto Rico signed the law. “It was just so amazing,” Isabel said. “My grandfather is my hero.”

Leandro’s treatment included chemotherapy, radiation therapy and a mastectomy. His recent scans show no evidence of disease, and every day he feels stronger.