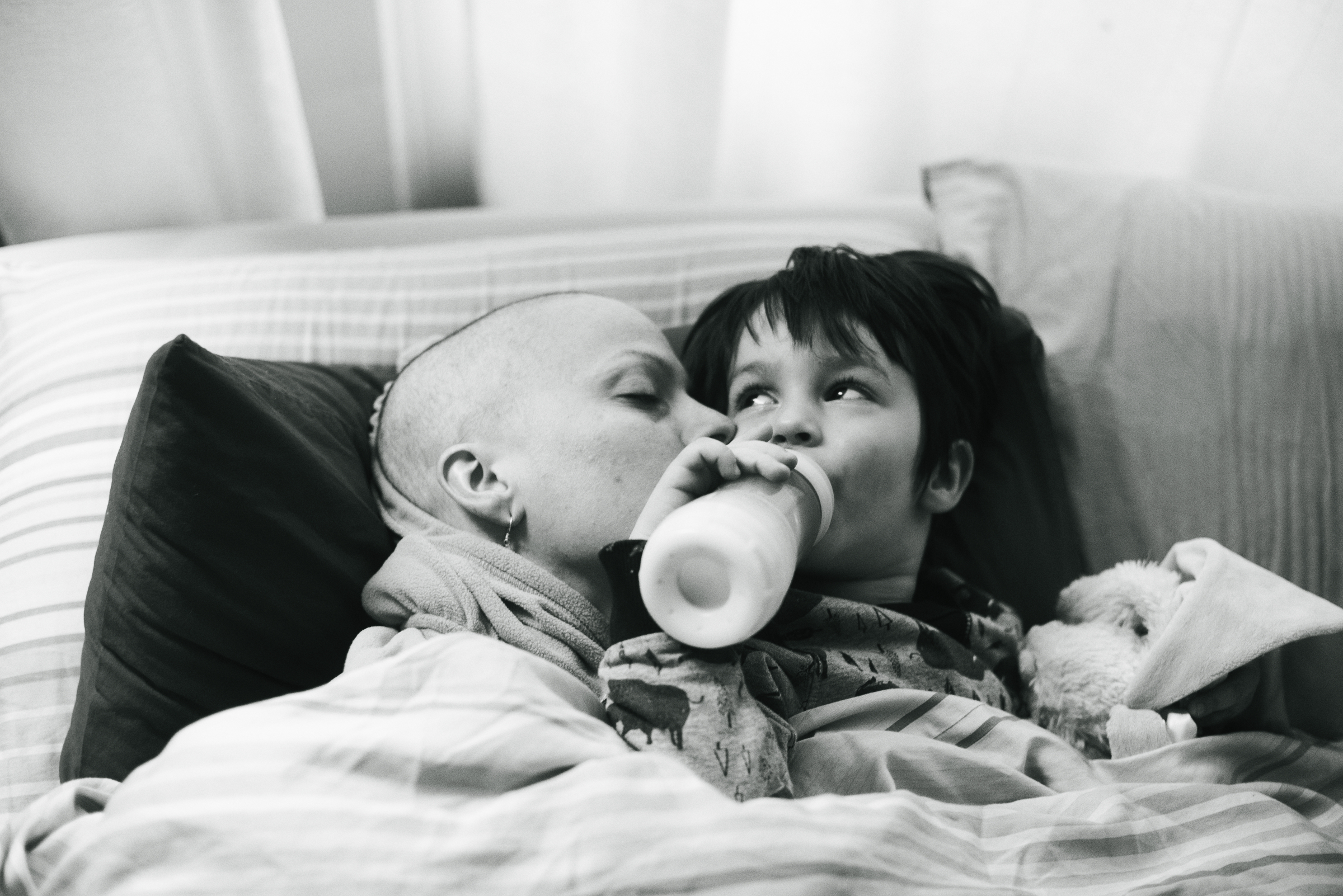 Anna Rathkopf found a lump in December 2016, on her 37th birthday and was diagnosed with triple positive breast cancer two weeks later. Anna and her husband, Jordan, immediately knew they wanted to document her breast cancer journey through photographs.

For Anna, the camera and photographs were a good way to take her mind off chemotherapy, radiation, surgery and the biologic treatments she underwent. For Jordan, they were a way to capture tender moments of Anna and their son, Jesse, who was two and a half years old when Anna was diagnosed.

“It was just hard. I was scared. I didn’t want to be a single father,” Jordan said. “The photos I took of my wife and son together, wasn’t so intentional, it was just me holding on to dear life. Worrying if she dies, is this what I’ll have left; a photo of her and Jesse.”

Anna said the camera also helped her process her reality at the time: the body that gave life to her baby boy two years before, and the breasts that she used to feed him, now had something growing inside that was trying to kill her.

“We went from talking about having a second kid, to suddenly thrown into no more kids, breast cancer and … your whole life is just upside down,” Anna said. “I was taking a lot of selfies and was looking at myself, trying to understand how a body that two years before gave life … it really did feel like a deep betrayal because I went from something so amazing, to possibly dying.”

Anna started her treatment with a lumpectomy in January 2017 and concluded her biological treatments in January 2018. She is on a daily dose of Tamoxifen until 2028 to lower her risk of recurrence.

Even though Anna has no active signs of breast cancer, the thought of a breast cancer recurrence is still on their minds. “It never leaves us. I think you’re always aware of it,” Jordan adds.

Anna, too, says that the thought of another diagnosis is real.

“I cannot go back to the innocence of how ‘I’m okay, I’m invincible. Nothing will happen to me,’” she said. “You start thinking, ‘what’s going to happen if I get metastatic breast cancer,’ and you see the people around you who might have it and it’s scary.”

Jordan came across those photos shortly after Anna’s diagnosis as he was searching online for as much information as possible about breast cancer and people’s experience with it.

“I was reading all these medical reports and scientific reports that were being put out, test studies that they were doing. I felt like that was the clinical, medical side, but what about the human side?,” Jordan said. “There must be some cool photographers out there doing something about living with cancer. And all I was finding was older women; and then I came across Angelo’s piece.”

Jordan says he was initially upset by Angelo and Jennifer’s photos because it wasn’t the happy outcome anyone would want. The photos hit just too close to home. Yet, he was also drawn in because the photographs were so honest and raw. They helped him finally understand the effect breast cancer can have. While the photos were sobering, they were also inspiring.

“I felt like without having to talk to each other, there was someone out there who knew what I was feeling a little bit,” Jordan says. “When I saw Angelo’s work I just felt like, ‘Wow. This is what I want to do. I want to create something like this.’”

Anna and Jordan now photograph others going through breast cancer treatment, focusing on women who are typically underrepresented in breast cancer literature.

“Percentage wise, maybe older women get it more, but I felt misrepresented because there are no younger women with little kids or Black women on brochures anywhere,” Anna said. “And you start feeling it won’t happen to me.”

Now Anna and Jordan are sharing these photos with the world, lending them to Susan G. Komen as part of our effort to show the reality of living with breast cancer. Through their powerful photos, they are showing no one is immune from breast cancer.