Looking Back, I See My Strong, Resilient Self At Each Stage Of Breast Cancer Treatment 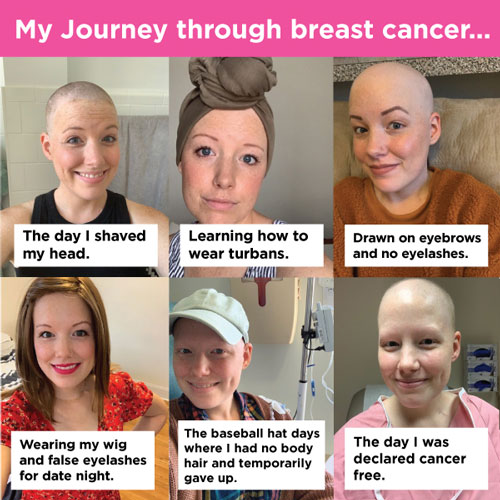 My heart rate was skyrocketing, and I could feel frantic pulsing of blood into my face with each step forward. The hill felt particularly steep and daunting today. My one-year-old son sat contentedly in the seat of his umbrella stroller in front of me, completely oblivious to the fact that his chubbiness was contributing to my exertion. My three-year-old, short legs tired from the walk, clung onto the side handle of the stroller, clearly hoping to catch a ride on my momentum like usual. But today, my breathing was fast and shallow, and my muscles ached. Sweat was trickling down the sides of my bald head, stinging my eyes. My kids looked up at me quizzically, wondering why we were stopping again. As my heart rate slowed, I glanced back up the hill to see how much was left. I could see the door of our apartment building. Not much further. Taking deliberate, slow breaths in and out through my nose, I started up the hill again.

It was September and I had been on chemo for what felt like forever. In reality, it had only been about four months since my shocking breast cancer diagnosis at the age of 30. Three debilitating months of weekly infusions that left me weak and so different from the person I had learned to recognize as myself.

Prior to cancer, I had been a healthy, energetic mom who happily pushed a double stroller wearing a heavy backpack of toddler accessories all over the zoo and neighborhood parks. I usually had my long red hair up in a ponytail and some natural looking make up on. I was blessed with a pretty even complexion, so I usually just put on a bit of eyeliner, mascara, and some color on my cheeks. I ate well, exercised, and had never been to the doctor for anything but normal check-ups or the occasional flu. I was a happy, healthy person. Or I used to be. Now I looked in the mirror and didn’t even know who was looking back at me.

I had started chemo in June, right as spring was turning to summer. As the weeks dragged on and the drugs built up in my system, I began to watch my body change—both in appearance and in stamina. The first significant loss was my long hair which gave up holding on to my scalp after only 16 days on chemo. It started shedding in clumps and I knew it was time. The day we shaved my head, I looked at myself in the mirror and still saw a strong woman looking back at me. Sure, I looked a bit different, but I was still fiercely me and I was committed to this fight for my life. I added some extra mascara to my lashes and tried on big earrings to help balance out my new buzz cut.

Another month passed and the stubble that remained on my head began to rub off every time I touched my scalp. Tiny hairs covered my pillow in the morning and fell into the bathtub as I showered. Pretty soon, I was completely bald. I found it unsettling and depressing at first but after a good cry, I watched YouTube tutorials on how to tie turbans and head scarves and adopted a new look. I was still me, just a bald version.

Around the same time, I began to notice my eyebrows thinning and my skin seemed very dry all of a sudden. I had never had dry skin before, but this was nothing I couldn’t handle. I taught myself to pencil in my eyebrows using stencils I found on Amazon and added a heavy moisturizer to my skincare routine.

One day as I was lathering up my face in front of the mirror, I did a double take. My face had become so…round? All of the steroids had finally caught up to me and I was now sporting the cheeks of a toddler. Oh, and my eyelashes were shedding. These changes were harder to bounce back from and I found myself feeling angry and discouraged about my appearance. Still, I had no choice but to make the best of it so I added a bit of contour to my face and would occasionally wear a bold red or pink lipstick to distract from my moon face. I filled in my patchy eyelashes with falsies—usually ending up with an uneven lash line—but it was better than nothing.

My endurance was waning at the same speed that my physical appearance was deteriorating. Walking my kids to and from the park felt like a marathon. I was constantly breathing heavily, sweating profusely, and trying to get my heart rate back down. Simple housework like washing dishes, sweeping the floor, or running a load of laundry felt like monumental tasks. By about 2 or 3 in the afternoon each day I would retreat to my couch—completely taxed and void of all energy. My kids would play on the rug in front of me while I lay there, one eye open to referee their play. Prior to cancer, I lifted weights and jogged for fun. Now lifting a basket of laundry was almost more than I could tolerate.

The day I lost the last of my eyelashes, I cried. I cried because I felt hideous. I cried because it felt unfair. I cried because I was trying so hard to maintain my idea of myself as a strong, resilient person and it was just too exhausting to keep up with the constant change and loss anymore. I had done the whole “fake it ‘til you make it” for months. I had risen to the occasion, made the best of it, tried to view it all as temporary. But now, it felt final. I had no body hair. I had no energy. I didn’t look like myself. I didn’t feel like myself. Cancer had robbed me and I was left with someone I didn’t recognize. I stopped wearing lipstick and earrings and scarves. I gave up on fake eyelashes. I no longer drew on eyebrows. I got out a baseball hat and I put it on, and I stopped looking at myself in the mirror.

On October 31, 2019, after 141 days, I finished chemotherapy. I had accomplished the first big hurdle of breast cancer treatment but the next hurdle, surgery, still loomed in the distance. My doctors gave me four weeks off to allow my body to recover and regain some strength prior to the big day. I did my best to go on daily walks even though my body felt like it had aged ten years in the last four months. Each step felt like walking through Jell-O wearing a backpack full of rocks.

Finally, surgery day arrived, and I went under anesthesia for nine hours. Three different surgeons operated, removing my breasts, ovaries, uterus, cervix, and several lymph nodes. When I came out to recovery, I had nine new incisions and two drains. I had tissue expanders in place of breasts and an empty space in my abdomen where my reproductive organs had been. I felt stripped of myself, emptied and hollowed out. But I was done with cancer treatment. And I had survived.

Slowly, painfully, I healed. The incisions closed and I went in for biweekly fills of my tissue expanders. At this point, the changes had ceased to be so traumatic. After enduring nine hours of surgery I had started to respect how much my body had gone through and tolerated. It had been pushed to its breaking point and it was still standing. It had endured months of toxic drugs and aggressive organ removal and hormone changes and it was still breathing and beating. I was amazed at all my body had withstood.

The day I got the final pathology and was told, “you’re cancer free!” was the day that tiny hairs became visible on my bare scalp. My body was coming back to life. After months and months of loss and transition and weakening, my body had held on and endured. I had withstood so much change and transition and fought to preserve my sense of self. I had held on through so much and finally the me I recognized in the mirror was making her come back.

Looking back, I know that my true self was there all along even if I didn’t recognize her. The changes to my physical appearance only highlighted what I had always known: I was a strong, resilient woman. And the loss of my hair or my energy or my ability to do everyday activities only highlighted my inner strength as I continued to hold on day after day. Breast cancer tore my body apart in many ways. It wore my body down, aged it, and even killed parts of it. But when I came out the other side, I realized that cancer had only made me a truer version of my incredibly strong and resilient self. My body, now scarred and weak, tells my story of strength—and it’s a story I am proud of.