Honoring A Friendship Bound by a Metastatic Breast Cancer Diagnosis 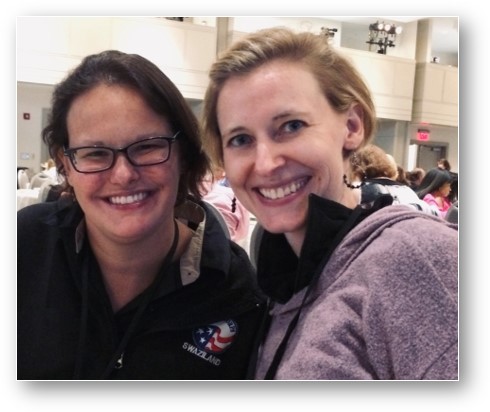 Almost 10 years ago I lost my father to a rare form of cancer. Losing the man who raised me, who taught me how to be a good person with strong values, and who held our family together is nearly impossible to convey. He was my world, and when cancer robbed him of his life at the age of 57, I thought my world would end too. Thankfully, I inherited my father’s optimism and persistence, but I had a creeping sense that my life would also be cut short. So, I vowed to have no regrets and adopted the “life is short” motto.  I quit my job, joined the Peace Corps, and immersed myself in a foreign culture.

As I was just beginning my 2-year stint as an ecotourism volunteer in Guatemala, Amanda De Fiebre, who I did not know at the time, had just finished her service as a community health volunteer in Swaziland in southern Africa. She did not need a tragedy to join the Peace Corps, she had a natural curiosity about the world around her and wanted to see as much of it as possible.

By October of 2013, Amanda, like myself, was officially a “returned” Peace Corps volunteer. While I was living with my mother in Pittsburgh on the hunt for my dream job in the field of conservation biology, Amanda was in a long-distance relationship, living in NYC working with a high school foreign exchange organization.

Then, at age 28, she found a lump in her breast. Amanda was diagnosed with stage 3 invasive ductal carcinoma breast cancer. Even though Amanda was diagnosed stage three out of four stages, she was still considered early stage. Sounds comforting right? Yet while she listened to people ring the bell in the infusion rooms to signal the end of their chemotherapy treatments, she was skeptical of all the hype around “beating” her cancer. Through her natural inclination to learn, she discovered that according to some estimates between 20-30% of all breast cancer patients will become metastatic. Think about that for a second – using the upper limit, that means for every 3 patients you know with breast cancer, one of them will already have or will eventually develop the terminal and incurable version of their breast cancer, which will more than likely take their life.

While Amanda was naturally optimistic, she was not disillusioned. So, she did what non-patients call “brave,” but what patients consider normal – she dutifully and faithfully endured her treatments which included the toughest chemotherapy regimens, a mastectomy to remove her left breast, and radiation. Amanda also became a patient advocate for research. To quote her, “I am alive and healthy nearly two years after my initial diagnosis. I do not owe that to awareness. I do not owe that to giant bra sculptures and pink coffee cups. I owe that to chemotherapy, targeted therapy, surgery, radiation, and hormone therapy. All developed through research.”

Meanwhile, in 2015 I had finally landed a job as the Conservation Director of a non-profit in Virginia managing hundreds of projects across the globe and traveling a ton. After a decade of running half marathons, my hips were shot, and I decided it was time to switch it up and train for a triathlon. After my first 20-mile bike ride, I was in the shower when I discovered two nodules under my right arm – what the hell are those and where did they come from?! I was told by a surgeon that I was too young to have breast cancer and having no history in my family, there was nothing to worry about.

Nearly six months later I found myself back in the same sterile exam room, having recovered from my surgery to remove the masses, waiting to hear the results of the biopsy. I was alone. I was annoyed they made me come in person to the office instead of just giving me the results over the phone. That same surgeon who told me not to worry, was now telling me I had breast cancer. My heart dropped and I felt dizzy, the surgeon mumbled words I don’t remember then left me alone again. I called my boyfriend and told him through tears, you have to come now, it’s cancer.

Oh cancer – it’s taken so much from me. That boyfriend – gone. That job – gone. The ability to have a child – gone. My father – gone.

At the age of 34, I found myself facing a double cancer diagnosis – breast and thyroid cancer, and after a biopsy that collapsed my lung and put me in the hospital for a week, it was confirmed that my breast cancer had spread to my lung, making me metastatic. Stage 4, the last and worst stage. It was just me and my brother in the room when the ER doctor delivered the news. I looked at my brother and said “gotta go break more hearts,” knowing how this news would crush my family. It had been 6 years since we lost my dad and we were just finally starting to recover from that loss – now I was threatening to make our family even smaller.

That same year Amanda was cautiously optimistic that her more than year-long active treatments had taken her out of harm’s way. She began integrating back into her normal cancer-free life. She got married, she settled into an apartment with her husband, started a new job, and was back in the water swimming again.

Life was good, until a nagging vision problem popped up – then tingling, then spasms, then jerking movements, which typically precede a full-blown seizure. Though Amanda had previously asked for a brain MRI, she was told to wait until she had symptoms, which is standard of care. The brain MRI revealed what Amanda had feared since her symptoms began; her breast cancer had metastasized to her brain – three tumors, including two large ones that required surgery.

Flash forward to April 2017, when Amanda and I finally met. We had both been living with metastatic disease for years now and we had both been accepted into an advocacy training program specific to metastatic breast cancer patients. They paired participants up based on similarities, and boy we had a lot. We bonded instantly and I fell in “friend love” with this brilliant woman who had a lot to be angry about in life, but who had a childlike innocence and purity that you rarely see in adults. She also happened to be a fierce advocate for herself and others, fearlessly asking poignant and relevant questions to oncologists at medical conferences and pushing doctors to always consider the patient first.

She became my metastatic breast cancer best friend, my MBC BF, or my breastie (as we say). We’d split the costs of hotel rooms and attend every breast cancer conference possible. We would stalk researchers and clinicians – always hoping to glean any bit of information possible about new treatments coming down the pike. We even got on Good Morning America!

The major difference that loomed between me and Amanda, unspoken, was that I had no evidence of disease and was still on my first line of treatment. Amanda had periods of stability, but her cancer was smart and did not respond well to anti-HER2 therapies. But a new drug called DS-8201, started getting a lot of buzz and showed promise in patients with HER2-low cancers and last year she qualified for the DESTINY clinical trial. I think we (that is her friends and family) breathed a collective sigh of relief, because Amanda was doing so well on this trial and even had tumor shrinkage for the first time.

Yet after 8 months of stability, Amanda had progression again in her liver, this time she was out of options. There were no more trials or drugs to try, she had been on them all.

Amanda, however, was relentless in her determination to stay alive, even after being removed from the clinical trial. Her brain tumor started growing again and she had to endure a second craniotomy, which left her partially paralyzed and in rehab for several months without systemic treatment. Just as soon as her brain was stable and she started to regain her mobility, the lesions in her liver began to grow– whack-a-mole is the analogy doctors use, and that’s what it felt like. You put out one fire to find another one burning out of control.

We started to get creative, looking for any mutation we could target. We found one- PI3K. A PI3K inhibitor (alpelisib) had just been approved and one of the best oncologists in the country, Dr. Nancy Lin at Dana Farber, had a trial. We knew it was a long shot that Amanda would qualify for the trial with her liver enzymes so high, but we were hoping to request the drug for compassionate use. When no comparable alternative therapy exists, compassionate use allows patients access to drugs or biologics outside of a traditional clinical trial setting. It’s a Hail Mary.

I would love to tell you the Hail Mary paid off, that we got Amanda on this miracle drug and that she is doing great. But the reality is, a month ago I flew to Florida to say goodbye to my dear friend and to give her permission to let go. She told me over and over again that she did not want to die and asked if I had any other ideas, but I did not. On August 30th, my sweet friend passed peacefully in her home with her husband and mother by her side. Before she died, I asked her if she had any regrets about how we tackled her cancer and she thought for a second, and then said “no, I think I did everything possible.” And she did.

I vowed to Amanda and to her family to continue to share her story to educate people about the realities of metastatic breast cancer. We exist on a wide spectrum, sometimes you meet a patient like me, who you would never guess lives with a terminal illness. Someone who has all their hair and doesn’t look sick, but still receives monthly infusions. Other patients “look” the part- bald, fatigued, wheelchair bound. Regardless, we have all been to hell and back and we just want to be around long enough to see our kids grow up, to go on our honeymoon, to travel to faraway places, to swim in the ocean, to get married, to live!

There are so many things I want to share with you about Amanda – her hilarious sense of humor, her love of children and desire to start her own family, her fierce independence, her generosity, her intrepid spirit, and so much more, but I hope I have impressed upon you the incredible person this world has lost.