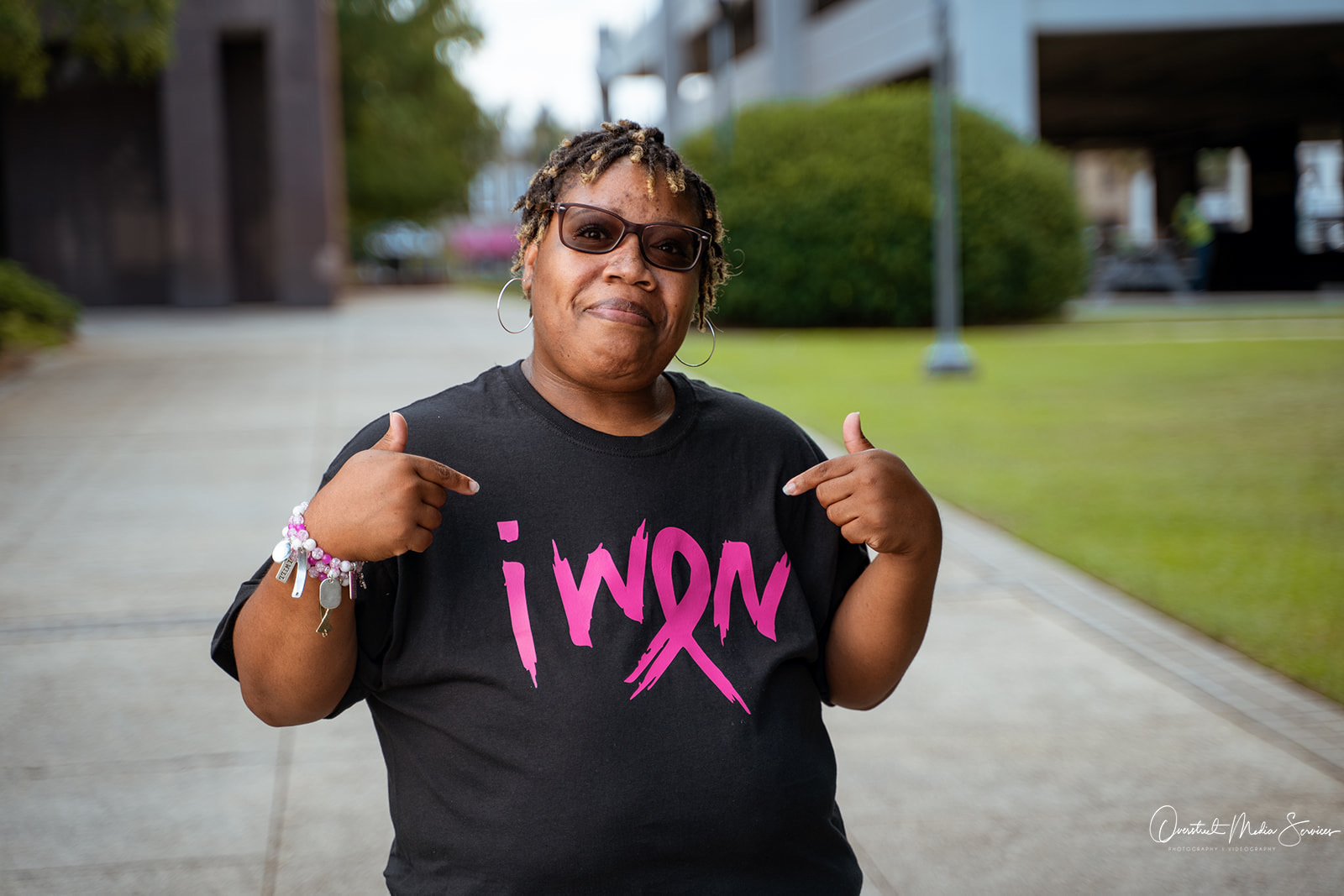 In 2013, at the age of 29, I was diagnosed with Triple Negative Breast Cancer. A single mother of two young boys, ages seven and four, I was an emotional wreck! So young and three months away from turning 30, all I could think was “why me?” But as time went on, that “why me” turned around and became, “why not me?” At that very moment I knew that my life, my journey and my fight would definitely be a life-changing walk.

I lost two of my favorite women in my life to breast cancer. My grandmother and my kids’ grandmother were both strong women that exemplified strength, courage and hope! Through my journey of chemotherapy, surgery (double mastectomy) and radiation, I saw them (my grandmother and mother-in-love) in me and I was able to exemplify their strength, which helped me through tough times. My fight was not about me, but rather was for my two children! I could not give up on life…and I thank God for not giving up on me…He most definitely deserves all the praise!

No matter how strong and positive I tried to be, there would be moments that I just couldn’t control, no matter how hard I tried. I didn’t tell my children anything about my diagnosis and I refused to get counseling for us. I felt as if it would be better for me not to tell my children. I tried to keep up with my routine of being a mother and doing things to enjoy my children as much as I could. I know that there were things changing that my oldest son may have noticed, but I still didn’t tell him anything about my health. My dreadlocks in my hair began to fall out from the root of my hair, so I went ahead and let the barber cut me a bald head. I was cute but being a straight bald-headed lady wasn’t my thing, so I wore wigs most of the time. This was just one way in which I camouflaged my sickness. I drove myself to and from chemo, oftentimes not telling anyone about my appointments. Being alone for chemo allowed me the time to meditate and talk to God.

I took the paths I did because I knew I had children to take care of and I didn’t want to leave them by being negligent and not doing as I should to better myself. I followed the doctor’s orders and treatment plan they suggested.

I also instructed them to cut my breasts off (known as a mastectomy). I was adamant about it because breast cancer runs in my family. I took the BRCA genetic test and my results were positive, so I knew that having a mastectomy was the best thing for me. Unlike some women, I chose not to get reconstructive surgery! I have been breast-less for almost seven years and I don’t regret it. I also had a second cousin go through breast cancer with me and she had a mastectomy as well. One of my first cousins is a breast cancer survivor and she also had a mastectomy about a year ago.

Losing my mom at the age of 17 and having to experience such hurt, I prayed and asked God to please heal me, because I didn’t want my kids to feel the pain that I felt without a mom. I often said to my care team that if I didn’t have children, I wouldn’t take chemo, or I wouldn’t take radiation, etc. I’m so glad that I had such inspiration, which made me fierce during my fight!

I’ve always been a strong person, but I realized just how strong I really was at 29. And now at the age of 37, I’ve accomplished so much in seven years for me and my two sons. I graduated in 2018, with my Associates degree in Criminal Justice and 2019, with my Bachelor’s degree in Criminal Justice. I am the CEO of FIERCE Emporium, LLC, which is my personal brand with several services under my umbrella. I’m writing my first book to be self-published soon. My two young men have grown up – they’re almost 15 and 12. They are doing great and they love to help me share my journey. Their career goals are to go serve in the military! Now that they are older, I share my journey with them and they are very understanding and are so thankful that I was able to fight and be a survivor. We are always doing something to show our love for those that are battling and those that have lost their lives in the fight.

This September 2020, marks seven years since completing my treatment. I celebrate being a warrior! I’m bold, breast-less, beautiful, and blessed! I share my testimony with others and encourage others through my walk of life! “No weapon formed against me shall prosper!” Be blessed!