Breast Cancer and My Family History 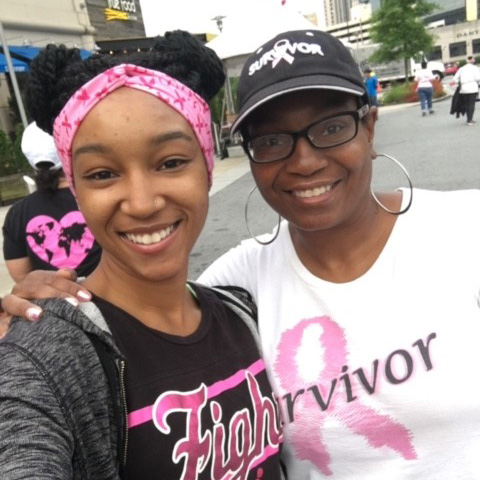 In 2015, after a routine mammogram, Carolyn learned she had breast cancer, six months after her mother passed away from the same disease. “I was calm, I didn’t panic,” she says. “I cried, of course, I cried because other than my mom having had it, I didn’t know a whole lot about breast cancer.” Aside from Carolyn’s husband, Darryl, her mother is who she would have called upon learning the news. “But she wasn’t there. Instead, God just put up a calm over my life, telling me he was going to bring me through this.”

Although Carolyn’s diagnosis and the barrage of doctors and specialists she met with in the months that followed were overwhelming, Carolyn felt an overwhelming sense of calm. “God put me in all the right hands for this time in my life,” she said. Carolyn was a probation officer, working with kids who violated their probation and broke the law. “I could do that with ease. I used to ask, when I was younger, why did God make me the way he did, make me strong, able to handle every situation? Now I know. He made me this way so that when I was diagnosed with cancer, I could handle it with ease.”

Carolyn tested positive for the BRCA2 gene mutation, and quickly encouraged her siblings, as well as her daughter, Brianna, who was then in her early 20s, to undergo genetic testing. Carolyn was devastated when Brianna tested BRCA2 positive, but she’s proud of how her daughter faced the challenge in front of her.

“The last thing I would want is for her to have that fear and worry of breast cancer,” Carolyn said. Brianna met with her doctor, who explained what this meant and went over her options and choices. “Brianna went through all of the options and decided to undergo a (prophylactic) double mastectomy.”

Even in the midst of treatment, Carolyn makes an effort to work out and live a healthy lifestyle. “When I was first diagnosed, people would call and say they were sorry, they were so sad, they cried. And I said—what are you doing? There is so much research out there, so much hope,” she said. “And we are not alone. We have researchers and doctors, and we have Susan G. Komen, by our side, looking for a cure.”