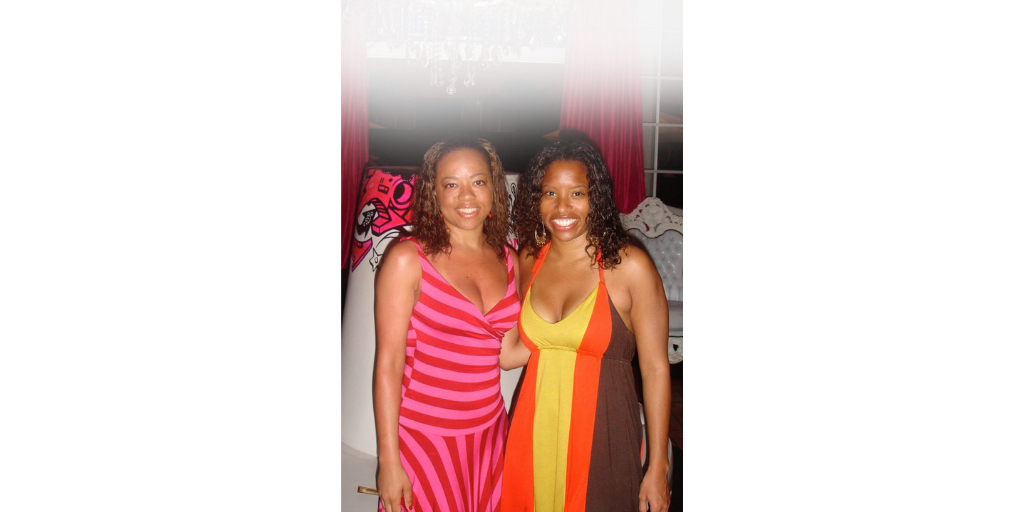 April and I met during my sophomore year of college around 1998, and we’ve been friends ever since then—she was my maid of honor at my wedding. She doesn’t know this, but a friend had already prepared me for the news of her diagnosis, so I didn’t get super emotional when she told me. Our mutual best friend, who is a physician, called me and told me she suspected April had breast cancer, and I trusted her judgment. When April told me she was getting testing, I tried not to be reactive, considering what I knew, and I told her, “We’re going to hope for the best.” The next morning, April called me and said, “I need to tell you something. I have breast cancer.”

She was 39 years old when this happened, and neither of us really thought breast cancer was something that could happen to someone our age. This mentality that 30 is the new 20 and 40 is the new 30 sometimes makes people feel immortal. For me, April’s experience was a brush with reality for all women, and I realized we have to start taking better care of ourselves. If we want to be here for tomorrow, we have to start doing what’s necessary and we also need to go to the doctor.

April is always so composed and stylish with her New York persona. She fits that whole Sex and the City, super cute and stylish look. She is a take-no-stuff kind of person, so I knew if anyone had fight in her, it was April. I told her, “If anyone can beat cancer with grace and style, it’s you.” My biggest concern after learning she had breast cancer was figuring out how I could support her, and continue to do all of the things I needed to do for my own family. I live in Atlanta and April lives in New York City. I’m married with three kids, and I work. But April’s friends are her family because both her mom and dad passed away earlier in her life. We’d been friends for more than 20 years and I wanted to support her as best I could.

She had a lot of people who wanted to do things, but I thought we should get some order to the chaos. I started a group chat and April sent me names of people she wanted to add. We called the group “April’s Village and Army,” which was based on the African proverb, “It take a village to raise a child.” It was about all her friends, everyone who loved her and cared for her, coming together to support her in any way we could. April’s boyfriend, two other close friends, and I would share updates about appointments and progress out to the larger group through the chat. April wasn’t in the group chat, so we could talk about her health and figure out what we were going to do to support her. That’s also how we coordinated who was available to attend doctor’s appointments.

Since I couldn’t be there every day, I supported her by rallying the troops and organizing everyone to make sure she was getting help. I didn’t want anything to fall by the wayside. Everyone came together to make sure she always had someone there with her throughout her journey.

Though April doesn’t believe in God, prayer was important for those of us supporting her. We talked about how we could be supportive without putting our beliefs on her. We used her mom, Joan, as her higher being. A lot of times, especially in her presence, we’d say, “Oh, Joan is looking down on you.” We wanted to find ways to support April based on what she believed. We explored group counseling sessions, meditation, and other alternatives to support her that weren’t strictly religious. It was important to support her mind, body, and spirit to get through this journey, regardless of what or who any of us believed in.

I have a few friends who are doctors, so we worked together to coordinate her care. We tapped into our resources and got April an appointment at Sloan Kettering. A friend of ours who is a cardiothoracic surgeon went with April to her first several appointments and asked a lot of questions. I think most people wouldn’t even know what to ask, so having that kind of support offered April the opportunity to be more informed and well-cared for.

Through supporting April, I also realized the importance of focusing on my own health. Her experience made me so much more aware of a number of things, related to more than just breast health. Before April’s diagnosis, I had never been to my doctor to have a clinical breast exam. I have no history of breast cancer in my family, and I was also just 38 years old. I thought, “Eh, I don’t need to worry about it.” Since her diagnosis and going on this journey with her, I’ve started paying attention to my own breasts. According to her doctors, April’s awareness of the changes in her breast is what helped her to notice the lump.

This experience truly cemented our friendship. April is one of those people who will bend over backwards to do things for people. After her surgery, she said to me, “You’re an amazing friend. Thank you.” She understood I wanted to be there more, but physically I couldn’t always be there. But when I could be, I was there. I thanked her for understanding and for letting me support her in a way that helped both of us.

When April was diagnosed, I explained to my kids, who are ages five, three, and one, what was going on. I didn’t shield them. I’d signed up to do a breast cancer walk, and my oldest son knew Auntie April had breast cancer. He knew she had to have surgery, and we talked about praying she would be OK. When he saw her recently, he said, “Oh, Auntie April, you’re not sick.” She said, “No, I’m feeling a lot better.”