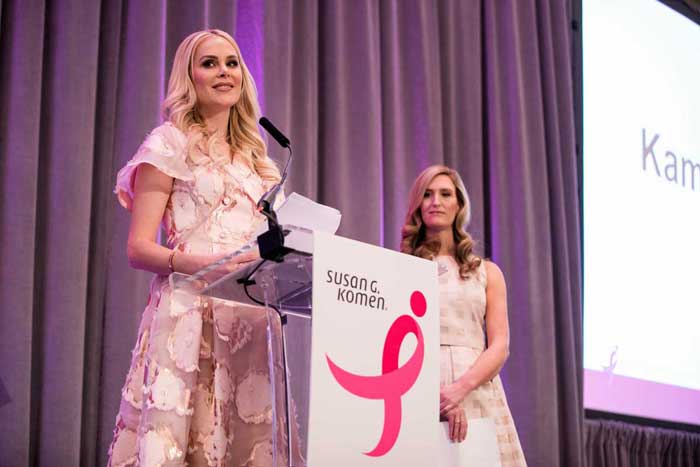 Earlier this month Susan G. Komen celebrated our organization’s 37th Anniversary, with a special luncheon in Dallas, Texas. The event drew a mixture of old and new friends from across the DFW area, who all gathered to raise funds and celebrate the impact the organization has made for nearly four decades, driving scientific research, mobilizing communities to care for those in need, and touching the lives of millions… all in pursuit of creating a world without breast cancer.

Leading the celebration was a collection of inspiring women – including ABC’s Amy Robach, who provided the afternoon’s keynote address – sharing powerful stories of how breast cancer has touched their lives.

The event kicked off with a heartfelt presentation by Dallas’ own Kameron Westcott, who served as the Luncheon’s Chair. The Real Housewives of Dallas star took the stage with her dear friend and two-time breast cancer survivor, Kaitlin Lindsey. After welcoming guests, Kameron started by asking an important question. “Why am I here? Why am I imploring each of you, including my friends and family, to support Susan G. Komen in our fight to end breast cancer forever? The answer is simple,” she said. “It’s because of this strong, beautiful woman standing next to me, Kaitlin Lindsey.”

Kameron went on to explain that she and Kaitlin have been friends since they were kids in California. Their friendship is one that has transcended time and miles and is now more like a sisterhood.

“Four years ago, I received the call from my sweet friend that no one ever wants to receive,” recalled Kameron. “Kaitlin told me that she had been diagnosed with breast cancer.”

Kaitlin then stepped up to share her inspiring story. She explained that since the first day of first grade, the two did everything together – from talent show tryouts and bad perms, to college road trips and a million bowls of mint chocolate chip ice cream in between. “Never did we imagine that years later we’d be here together, in support of Susan G. Komen’s fight against breast cancer, and in the fight for my life,” said Kaitlin. Kailin never imagined that breast cancer would be in her future.  She described her childhood as rather extreme, with her mom being “a pioneer of all things natural and organic – replacing Halloween candy with sesame sticks and trading Lunchables for cucumber sandwiches.” She never smoked, was a competitive athlete and for all intents and purposes did everything right. “But none of that mattered,” said Kaitlin. “I am a two-time breast cancer survivor.”

At 32, Kaitlin was diagnosed with stage II breast cancer and underwent a mastectomy four days later. This was followed by eight reconstructive surgeries and numerous other procedures. “At that time, I thought my journey with breast cancer was over,” she said. “I never imagined I would need to beat the odds again, but on March 8th, 2018, I found out my breast cancer came back.”

She had more surgery, leaving her with more scars, but doctors got the tumor and her margins were clean. The cancer didn’t spread. To be certain though, Kaitlin underwent 26 rounds of radiation.

“The heartache of telling my family I have cancer was the worst moment of my life – especially for my dad, who has protected me, his little girl, all his life. Suddenly he was helpless,” she said through tears. “Having to say those words to my loved ones again nearly broke me. I want to see a day where no one ever has to say them at all.”

Everyone told Kaitlin that her case was rare, until it wasn’t. Her doctors admittedly acknowledge more research needs to be done. “Did you know that one in eight women in the U.S. will be diagnosed with breast cancer in her lifetime?” Kaitlin asked the crowd. “That is why I am here today. While sharing something personal so publicly is difficult, I know that it has the potential to save lives.”

“We all have someone in our life who has either been touched by this disease, or who we would do whatever we possibly could to protect them from it,” said Kameron. “Well, Kaitlin, you are my One. You are the reason why I care so much about this fight to end breast cancer and Susan G. Komen’s work to make that happen. I couldn’t imagine my life without you and I am so thankful that you are okay. I love you.”

So, who is your One? Who is the one person in your life that you would do anything in the world to protect from this deadly disease? It could be a mother, a sister, a brother, a friend – anyone. It could even be you. Share your story with us and let’s fight for that One.