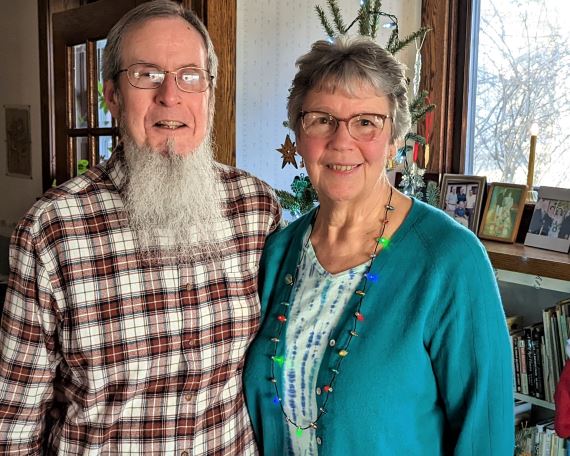 Ginny Mason was diagnosed with inflammatory breast cancer in 1994.

The day in 1994 that Ginny Mason learned her life had changed forever, she sat holding her 3-month-old granddaughter, trying to figure out how to tell her daughter and husband she might not live much longer.

She had learned, hours earlier, that she had inflammatory breast cancer (IBC). It is a rare, aggressive and difficult breast cancer to diagnose and treat. Even today, 27 years later, Ginny knows how lucky she was that after multiple months of doctor appointments, her surgeon recognized her symptoms for what they were: IBC.

Ginny carefully rehearsed what she’d tell her husband, a minister, but the moment she saw him, she started to cry. “I was diagnosed with cancer, I’m going to die,” she told him. They sat together on the couch and cried. “It had been raining, and when it stopped, we could see there was a rainbow,” Ginny said. “For us that was not necessarily a symbol I was going to survive, but that we’d get through it.”

Ginny, a nurse, searched for information on IBC, but that was before the internet and there wasn’t much and what she could find was not hopeful. “I received a one-sheeter in the mail from the National Cancer Institute,” Ginny recalled. “It said there was maybe a 3% chance of being alive in five years.”

Ginny’s treatment included chemotherapy, a mastectomy and radiation therapy. During this time, she got together with friends who were also undergoing treatment for breast cancer. Soon, they realized these get togethers were important. “We decided it was useful to have a support group of some kind,” Ginny said. As a mental health nurse, she was elected to start the group, which began meeting twice a month. “It was an amazing experience. I’d never done anything like that in my life, it was amazing to watch people interact who had nothing else in common.”

Gradually, Ginny became more involved in advocacy and in 1999 she learned there was an online IBC community, something she’d been unaware of until then. Today, she is the executive director of the Inflammatory Breast Cancer Research Foundation.

“We need more research and awareness about IBC. It still boggles my mind how few medical professionals acknowledge that this disease is as prevalent as it is,” Ginny said. Recently, in partnership with Susan G. Komen and the Milburn Foundation, we’ve built a first-of-its kind scoring system to put parameters around what IBC is in order to help doctors better identify and diagnose this disease.

This novel tool will also enable researchers to study the biology of IBC and make discoveries to advance progress towards personalized care for all breast cancer patients.

Ginny finds herself telling everyone she can about IBC – whether it’s a nurse at a hospital, a flight attendant or someone she comes across running errands. “You never know who you’re going to have an impact on,” she said.

She also urges people to self-advocate. “It costs nothing to pay attention to your breasts and notice any changes. Do that regularly because you are the one that’s going to most likely pick up on it,” Ginny said. “And since there’s often no lump, mammograms don’t usually show IBC. You might see skin thickening, but it’s going to be the patient themselves who see something that’s going to make them question. Advocate for yourself. It can be hard to speak up for yourself, but if you’re not satisfied with what you hear, find someone else.”

Ginny and her husband have 10 grandchildren and two great-grandchildren. Ginny’s oldest granddaughter, the one who was 3 months old when Ginny learned she had IBC and struggled with how to tell her family, got married the year Ginny celebrated 20 years post-diagnosis and now has two little girls.