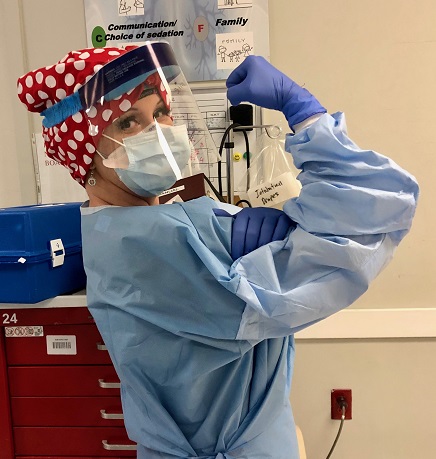 Code announcements constantly come over the hospital paging system, alarms beep, doctors and hospital staff rush to pull on personal protective equipment and a morgue is at capacity. This is life inside a hospital situated just outside of New York City for front line workers fighting the COVID-19 pandemic.

“I got a call asking if I would want to go to New York, and I said, ‘I’m not gonna say no to anything right now. If God makes the way, then I’m gonna go,’” said Jamie Wilson, a medical trauma nurse who was recruited by a travel nursing agency to work in New York, which has been the nation’s COVID-19 epicenter for weeks.

Wilson’s trek from south Texas to the Empire State took about four days. She stopped along the way to see her sister and pick up necessary but hard-to-find supplies – masks, hand sanitizer, gloves and cleaning products – that her friends and “Pink Peeps” had mailed. The Pink Peeps are dear friends she’s met while participating in the Susan G. Komen 3-Day® – a series of three day, 60-mile walks across the country.

“The Pink Peeps have been responding in force; I’ve received probably 100 masks since I’ve been here,” Wilson said. “I’ve been able to take supplies and distribute them among other nurses.”

Wilson arrived in New York in early April and works 12-hour shifts four times a week. She’s part of a Medical/Telemetry COVID unit – a group that is responding to COVID positive patients with a variety of medical conditions who require constant heart and oxygen saturation monitoring.

“Generally speaking, the patients are two to a room, and on my first shift I found a patient unresponsive and that roommate was listening to everything that was going on,” Wilson said. “It’s a reality that is incredibly painful, it’s incredibly traumatic for anybody that has been affected by [COVID-19].”

Wilson, who will spend three months working in New York, says she spends her days responding to back-to-back-to-back Rapid Responses. These are situations when a team of nurses responds rapidly to a patient with early signs of deterioration to prevent them from losing a pulse or heartbeat.

“I got a Rapid Response and while I’m gowning up and everything, I’m feeling super guilty that this person is laying there, and I know that he was unresponsive, and there is nothing I can do until I get that PPE on. It doesn’t do them any good if I’m laying in the bed next to them.”

The shifts inside the NYC-area hospital are long and hard, and marked by a back-and-forth between high and low points. After only three shifts in, Wilson said she had started struggling with what she calls “code fatigue.” The codes come in rapid succession and require an immediate response from healthcare workers on the floor.

Yet Wilson says the hospital staff get her through the days. “The support is incredible. The people I’m working with have basically been an extension of the Pink Peeps. I would have thought I met them all doing the 3-Day.”

And the hospital, too, is doing something incredible to boost nurse morale and break up the ‘gut-punching’ reminder of how vicious this disease is. “Every time someone leaves to go home or is transferred to a rehab facility, the hospital plays ‘Here Comes the Sun’ by the Beatles over the loud speaker,” Wilson said. “To hear that and know what we’re doing is working and people are recovering is an awesome feeling.”

In addition to what they call “Code Sun,” when the Beatles is played for all to celebrate, the hospital also has “Code Lavender.” Wilson says she learned about “Code Lavender” after she lost a patient.

“It’s basically a box of happy. Designated leadership for the day shows up with the box and y’all find a quiet place for a few minutes. There is a diffuser, lavender essential oils and some other stuff to help decompress for a few minutes,” Wilson said.

Wilson has dedicated her life to caring for others. She’s been a travel nurse before, previously worked for the American Red Cross for five years, worked on very busy hospital floors, and volunteered as a medical crew member for three Susan G. Komen 3-Day events.

Wilson’s grandmother and mother were both diagnosed with breast cancer and she originally began participating in the 3-Day by walking for her grandmother. Wilson credits the medical crew for getting her through the 2016 3-Day in Seattle after a bad motorcycle accident five days before the walk left her in rough shape.

The medical crew – an all-volunteer staff who provide medical services to walkers throughout the 3-Day event – advised Wilson not to participate.

“I just broke down crying and explained to them that my mother was battling stage III and I needed to be able to walk. I promised to do everything they asked me to do, and I ended up finishing because of the medical crew,” Wilson says.

After that experience, Wilson said she wanted to crew medical to see what that side of the 3-Day event was like. “You have one perspective as a walker; I wanted the perspective from the awesome crew that make this event possible. It became a bucket list item for me.”

Wilson said that the people she has met while walking and crewing the 3-Day have been reaching out to her while in New York, asking how they can help, sending lots of prayers and letting her know they’re thinking of her. Many of the people she hears from are people she encountered as “patients” while crewing a 3-Day event.

“The 3-Day bubble is just something,” she says. “The best thing about the 3 Day is the endless supply of love and hugs. I’m always wanting to get back to my Pink Bubble.”

Wilson says she has been involved with the Susan G. Komen 3-Day since 2013, and it isn’t something she ever plans on leaving.